How Leaders Rise From Failure And Keep Their Team With Them

It’s not enough to get back in the saddle after you fall. You must embrace a shift within you. You must address a crowd around you. You must change a story about you.

Have you ever watched a movie to relax, only to have it move you deeply, to speak to you, to shine a light on where you are at?

I recently saw The Outfit. I was alone, saddled up with some coffee and ice cream, ready to discover why the movie was so well-reviewed. I won’t give away the plot. But near the end, the central character of the movie (a tailor, though he prefers to be called a cutter), says:

"At the finish, you must reconcile yourself to failure. It’s not perfect. You have to make peace with that. How? Well, you sit at your board, you lay out your tools, and you start again.”

We fail. To err is human and all that. No project turns out perfectly. We don’t lead perfectly. Even if a gymnast scores a perfect 10, they endured a lot of “not 10s” along the way.

Sometimes the imperfection is simply that; a room for improvement. Sometimes, the failure is outright shocking to our system. Sometimes failure is quickly forgotten; sometimes it haunts you.

How Do You Handle Failure Even When It Stays With You

I used to avoid failure, and the appearance of failure, at all costs. Then disaster struck. Finances were lost. Accusations were made. My reputation was shaken.

The depression that followed was immense. The self-loathing was intense. The only response available to me was to learn from it and move on. But the dark cloud of failure moved with me.

I sat across from a wealthy and well-established CEO. He asked about my story, so I shared with him the good and the ugly. He interrupted me and said, “I’m glad you told me that. I wouldn’t trust you if you hadn’t failed at some point.”

Or as another CEO told me, “No leader is worth his sh*t if he hasn’t failed.”

What did these CEOs know that I needed to embrace?

Rising from failure is an inside-out job

Separation is any behavior that keeps people from getting too close or knowing too much. It manifests in competition, anger, isolation, falsehood, insecurity and any other number of traits. Basically, if you feel threatened and you fight, flee or freeze, you are separating.

Fear is the flip side of our longings. We have positive aspirations (I want to be respected) and we have a matching fear (I will be rejected - again).

Fear is rooted in shame, the belief that we are not enough.

You cannot rise as the same person who fell.

Heather (Dorniden) Kampf is the most decorated female athlete in track and field history. At the University of Minnesota, she was an eight-time All-American holding ten school records. She is the only University of Minnesota athlete to compete in every NCAA Championship in cross-country, and indoor and outdoor track. She is a four-time United States National Champion in the one-mile road race.

Her most infamous race was in the 2008 Big Ten 600-meter indoor final. In the second lap of a three-lap race, Heather and Fawn Dorr of Penn State clipped each other’s feet. Heather skidded onto her stomach, her body bouncing on the track. On video, you can hear the announcers shout “O, Dorniden is down!” Her teammate, also running in the race, barely missed striking her face with her cleats.

Heather did not stay down. As she rose, she trailed the field by thirty meters. Midway in the backstretch, she caught up to Fawn Dorr. The announcers call out, “This is a gutsy effort by Dorniden. Can she pull it off?”

We watch as Dorniden’s long legs hit fervent strides. Her face is a mask of stern determination.

The inside lane denied her, Dorniden covers the extra ground of an outside lane, pushing hard, joining in the pack.

At the finish line, as Heather pushed to first, the announcers cry out, “It’s Dorniden! Unbelievable! That is amazing!”

Heather would later say, “The last fifty meters, I hit a gear that I never knew I had."

When you fell, who fell?

Dorniden fell as the most decorated runner in her school history; she fell as the expected winner of the race. She could have stayed down. No one would have faulted her. But she didn’t.

She rose as the comeback kid. She rose as one who would be remembered as a finisher not a quitter, and not only a finisher, but a winner after a fall.

Dorniden is known more for her response to her fall than to any other win or accolade of her career. She fell as a great runner. She rose as a hero. So who really fell? A runner who had more in her, a gear she never knew she had. So do you. So did I.

Failure is an opportunity to rise as a hero because you do the deep work of re-examining the shame, fear and separation that trips you up. Failure is an invitation to see the more that is in you.

The CEOs I spoke with knew that genuine, compelling, leaders have done the tough work of the deep work.

Failure has an audience; rising has a following.

It’s not enough to rise from failure as a leader. We have people around us. We may or may not keep all of our team or relationships in the wake of failure. But failure gives us a greater opportunity to bond than we imagined. Failure is always an "us" equation.

We follow leaders who embody resilience. They are authentic, relatable and give hope.

Authentic means people don’t wonder what is being hidden or covered up. We don’t need all the details of a person’s story; we just want a true story. When a leader does the deep work, and is able to communicate discoveries they made and changes they seek, secrecy is broken and the genuine is on display.

Hope is a future reality with present significance. What will be true has implications for now. Leaders who rise become for those who follow the stable promise that defeat is not final, that growth is possible, that challenges can be conquered, and that people can come back from set-back.

Leaders in the wake of failure keep people around them by:

Another race. This time horses. Six are in the gate. And they are off.

The number 2 horse stumbles right out of the gate.

Classy Class sprints to an early lead. On the backside, another horse, El Kabeir, challenges the leader, but not the number 2 horse; he is far behind.

At the top of the stretch, three horses now press for the lead against each other, but it is not the number 2 horse; he is far back from the others.

It is like this for hundreds of yards. The pounding of hooves; the kicking up of dirt; the intense concentration of jockeys.

But then the race announcer raises his voice, because the number 2 horse “who had that terrible beginning is making a tremendous run here!”

The finish line is in sight. Distance and time are villains to the comeback. But no one told that to the number 2 horse. He pushes hard, he passes the leaders, and he claims the victory.

The horse’s name? I will let the announcer tell you.

As number 2 crossed the finish line, the announcer shouted, “It’s Far From Over!” 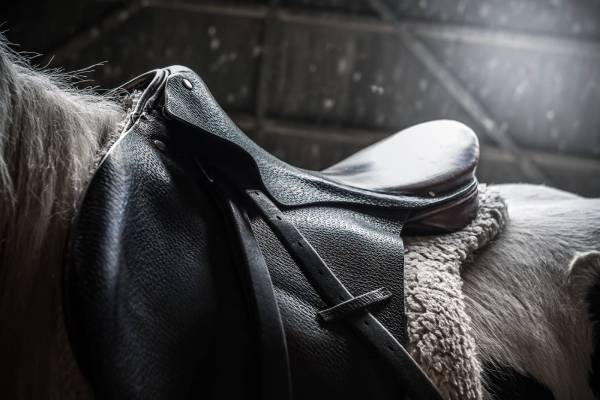